Where parties commit to divest a business in order to secure European Commission clearance of a deal notified under the EU Merger Regulation, the remedy buyer and the terms of the divestment agreement must be approved by the Commission before the divestment can be implemented.1 In most cases, this approval process involves the parties submitting a purchaser approval request after the conditional clearance decision. This “standard purchaser assessment process”2 culminates in the Commission issuing a separate purchaser approval decision, typically some months after the main transaction has closed.

However, in a substantial number of cases the parties include an ‘upfront buyer provision’ in the commitments, requiring the closing of the main transaction to be delayed until the Commission has formally approved the remedy buyer. Sometimes, a remedy buyer is secured even earlier in the process and the Commission accepts a ‘fix-it first’ remedy, where approval of the buyer is incorporated into the conditional clearance decision itself.3

The Commission prefers fix-it-first and upfront buyer remedies to a ‘standard’ divestment where the identity of the remedy buyer is crucial to the Commission’s acceptance of the divestment package.4 Such ‘non-standard’ remedies are useful if there is a reduced pool of potential suitable remedy buyers as they allow the Commission to “conclude with the requisite degree of certainty that the commitments will be implemented with a sale to a suitable purchaser”5 before the main transaction has closed. Parties may prefer a fix-it first remedy (to an upfront buyer requirement) in these situations as it should not delay the closing of the main transaction and may give them a greater degree of control over the divestment process, avoiding the risk of a ‘fire sale’.6

The aim of fixing-it-first might therefore sound like a ‘gold-standard’ for the Commission and parties. However, a review of conditional clearance decisions over the last five years (2014-18) shows that, although about a third of Phase I cases and two-thirds of Phase II cases involved non-standard remedies, most were upfront buyer cases with only a handful of genuine fix-it-first cases:7 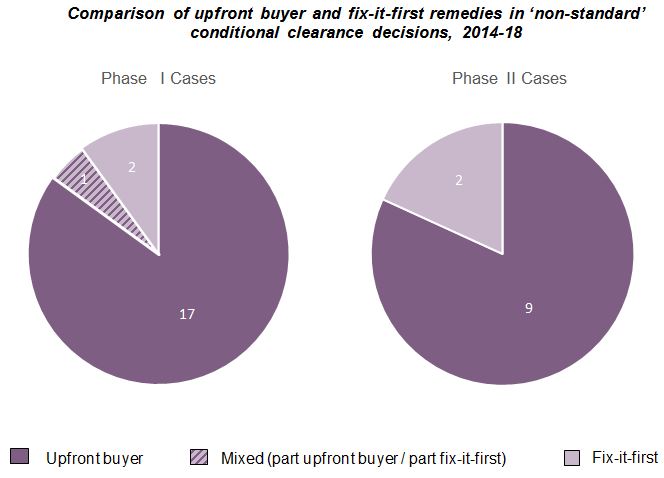 A key obstacle to fix-it-first remedies is the timing constraints imposed by the Merger Regulation. In non-fix-it-first cases the purchaser approval process can typically take between one and three months, and in some cases up to a year.8 Including the purchaser approval in the clearance decision requires the Commission to conclude the entire purchaser approval process simultaneously with its competition analysis of the main transaction. Theoretically, this involves evaluating the solution before the precise scope of the competition problem has been identified. Practically, this is challenging as it can require the parties to carve out an appropriate divestment business, find a suitable remedy buyer and start negotiating a divestment agreement before even formally notifying the Commission of the main transaction. Otherwise, parties risk running down the Phase I investigation ‘clock’ trying to arrange a fix-it-first remedy, and then either falling into Phase II or having to concede to an upfront buyer provision.

Pre-notification discussions can be useful in this regard,9 but the Commission is not obliged to express its concerns before concluding its formal investigation, and it is very unlikely that it would do so. Instead, some parties have resorted to ‘pull and refile’ tactics. The two ‘pure’ Phase I fix-it-first cases involved notifications that were withdrawn during the Phase I investigation and only refiled once a divestment agreement had been signed with a remedy buyer. Thus, in Boehringer Ingelheim/Sanofi Animal Health Business,10  the parties had formally notified in June 2016 with initial commitments being submitted in mid-July. A state of play meeting was held to discuss negative results from the market test of the commitments, and the parties withdrew their notification two days later. The parties refiled in mid-September after a binding divestment agreement had been reached with a remedy buyer (Ceva). The parties were able to use the additional two months to arrange the fix-it-first remedy, with the benefit of insights into the Commission’s concerns from the initial Phase I investigation.

The extended timetable of a Phase II investigation is perhaps better suited to a fix-it-first remedy. The lengthy period between the Article 6(1)(c) decision and submission of the final commitments11 can allow the parties to address concerns raised in the Phase I investigation and arrange a divestment package with a remedy buyer. This helps explain the higher proportion of fix-it-first remedies in Phase II cases.12 Yet, even at Phase II, time constraints are challenging. This is particularly apparent in ‘failed’ fix-it first cases which “combine an element of a fix-it-first remedy, namely the fact that the Notifying Party has already identified [a] possible buyer …, with an upfront buyer remedy”.13 In eight of the upfront buyer cases in the 2014-18 period a remedy buyer was identified in the clearance decision, but a separate purchaser approval process was still required.14 In many of these, it seems the parties had aimed for a fix-it-first remedy but were unsuccessful due to insufficient time. For instance, in Bayer/Monsanto, BASF was named as remedy buyer in the initial Phase II commitments and the clearance decision includes a preliminary assessment of its suitability. However, purchaser approval could not be incorporated into the decision as “several issues regarding BASF’s suitability as buyer require further investigation” and “BASF and the Notifying Party have not signed the final binding sales agreement for the sale of the entire BASF Divestment Package”.15 Even where the Commission incorporates its approval of a fix-it-first buyer in the clearance decision, upfront buyer provisions may still be included.16 The Commission is sensitive to the time pressure and the potential for fix-it-first remedies to fail, so can use the upfront buyer provision as ‘back-up’ to ensure certainty that the buyer will successfully acquire and integrate the divestment business.

Anna Lyle-Smythe and John Boyce are both partners at Slaughter and May in Brussels, advising clients on mergers, cartels and other behavioural matters, State aid and market investigations. They deal extensively with the European Commission and the UK competition authorities, as well as other competition agencies around the world.

Anna and John are contributing authors to Bellamy & Child: European Union Law of Competition 8th ed. (Chapter 8: Merger Control). They were assisted in the preparation of this article by Peaches Stanforth, trainee solicitor.

4. Remedies Notice (n 1, above), paras 53-57; Bellamy & Child (2018), European Union Law of Competition, 8th ed, Oxford University Press, para 8.185. The term ‘standard’ is used for cases where purchaser approval is issued separate to the conditional clearance decision, but the commitments do not include an upfront buyer provision. The term ‘non-standard’ refers to cases which were fix-it-first or included an upfront buyer provision. The Commission has concluded some cases with ‘standard’ divestments, even though they involved industries and divestment packages that prima facie might suggest that the Commission would expect a non-standard remedy; e.g. M.8444 ArcelorMittal/Ilva (7 May 2018) where the Commission did not adopt a purchaser approval decision in respect of the remedy buyer (Liberty House) until 17 April 2019 (several months after the closing of the main transaction on 1 November 2018).

5. Remedies Notice (n 1, above) para 57; also M.8102 Valeo/FTE Group (13 October 2017), para 207 which quotes this rationale. Although para 57 of the Remedies Notice is specific to fix-it-first remedies, it does also recognise that where the commitments include enhanced purchaser criteria regarding the suitability of a remedy buyer, an upfront buyer provision will generally be considered “equivalent and acceptable” to a fix-it-first solution. Further, a similar rationale is given for upfront buyer remedies at para 55, stating that these “may allow the Commission to conclude with the requisite degree of certainty that … the divestiture will be effectively implemented”.

6.In the Remedies Notice (n 1 above) at paras 54-55 the Commission explicitly states that an upfront buyer provision may be useful in incentivising the parties to close the divestiture.

7. The four ‘mixed’ standard and non-standard cases identified in the first chart (involving commitments to divest a number of different businesses, potentially to separate remedy buyers) were: M.7275 Novartis/GlaxoSmithKline Oncology Business (28 January 2015) and M.7881 AB InBev/SABMiller (24 May 2016), both of which involved standard and fix-it-first remedies and were cleared at Phase I; and Bayer/Monsanto (n 2, above) and M.8480 Praxair/Linde (20 August 2018), both of which involved standard and upfront buyer remedies and were cleared at Phase II. The one ‘mixed’ up-front buyer and fix-it-first case identified in the second chart (which likewise involved commitments to divest different businesses) was M.7252 Holcim/Lafarge (15 December 2014), cleared at Phase I.

9. And are generally encouraged, see para 1.2 of Form CO.

10. M.7917 Boehringer Ingelheim/Sanofi Animal Health Business (9 November 2016); also Valeo/FTE Group (n 5, above). Three Phase I clearance decisions in the 2014-18 period involved a fix-it-first remedy without a ‘pull and refile’, i.e. Holcim/Lafarge, Novartis/GlaxoSmithKline Oncology Business and AB InBev/SABMiller (all considered at n 7, above); however, in each of those cases the fix-it-first remedy was only in respect of one divestment, as the parties also had to divest other businesses. Although in Novartis/GlaxoSmithKline Oncology Business and AB Inbev/SABMiller these further divestments were on a ‘standard’ basis (so they were able to close the main transaction without having to wait for the separate buyer approval decision), in Holcim/Lafarge this further divestment was subject to an upfront buyer provision.

17. Investindustrial/Black Diamond/Polynt/Reichhold (n 14, above). Para 195 of the conditional clearance decision states that the commitments were designed in “close cooperation” with the remedy buyer.